What is Hoarding Disorder?

Hoarding disorder is characterized by a persistent difficulty in discarding possessions. This difficulty comes from a fear of wasting. Hoarders derive feelings of comfort and safety from their saved objects. They have an obsessive phobia of discarding items that may be needed later and have excessive emotional attachments to possessions. They also suffer from indecisiveness and perfectionism and feel a need to prepare for every possible contingency.

Hoarding is more like an impulse-control disorder than an anxiety disorder. Regardless of the true value or functionality of an object, a person with hoarding disorder will compulsively save everything in fear of losing a potential opportunity for use. 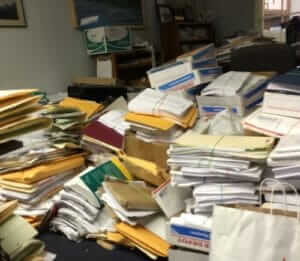 There is no single catalyst for hoarding behaviors, but a variety of factors can play a role. Contrary to popular belief, hoarding does not always develop in response to material deprivation; many hoarders grew up in wealthy environments. Co-occurring mental health conditions are often found alongside hoarding, such as OCD and depression.

Approximately one third of patients with OCD show hoarding behavior and 60% of hoarders meet the diagnostic criteria for major depressive disorder. Weight issues additionally are thought to co-occur with hoarding, and studies show that hoarders tend to have higher than average body mass indexes. It is important to understand the relationship between people with hoarding disorders and the objects they feel they cannot part with. People with hoarding disorder have abnormally intense emotional attachments to their possessions, which act as compensation for their lack of self-worth. Their items are often used to replace human relationships, and they may express the sentiment that objects cannot hurt them as people can. Possessions provide a sense of security, reminiscent of Winnicott’s transitional objects, or Harlow’s infant monkeys finding comfort in inanimate cloth surrogate mothers. Over time, people with hoarding disorder will accumulate piles of clutter within their homes. These piles often have no organizational scheme, and the person with hoarding disorder may consider each object equally important. Clutter acts as a form of protection against the world, almost like a fortress.

In addition to a sense of safety and comfort, a hoarder’s objects help preserve their history through memories associated with them. In other words, every possession tells a story. Hoarders tend to have adequate memory, but they do not trust their ability to remember. They have a tendency to rely on visual cues and may feel they must keep items in sight in order to remember them. This is especially true for people who have lost a loved one. Sometimes, hoarding begins by refusing to part with the departed’s belongings. In other cases, individuals who experience anxiety at the thought of their own death begin hoarding their possessions to save them for posterity. The idea of passing along their collection when they die offers potential for immortality (for example, Andy Warhol’s art collections as time capsule). Cognitive deficits also play a significant role in the development of hoarding behavior. People with hoarding disorder often have difficulty with information processing, sustained attention, and executive functioning, such as categorization or grouping items together. These deficits can contribute to hoarding in that it is difficult to sort out which objects they should keep and which they should discard. In order to avoid this difficulty, a person with hoarding disorder saves everything.

Though hoarding is immediately apparent upon entering a person’s home, often the loved ones of a person with hoarding disorder are unaware of this behavior. This is because hoarding is an underground psychopathology: hoarders act in secret behind closed doors due to shame. They often avoid allowing people into their home to avoid unpleasant questions or suggestions to discard their things. Insight into their own behavior varies and tends to wax and wane. It may disappear altogether when the hoarder is faced with sorting tasks, leading to vehement refusal to clean their home.

How is Hoarding Disorder diagnosed?

The first step in addressing and treating hoarding disorder is to determine a proper diagnosis. Not every person who collects items is a hoarder. Diagnostically speaking, distress and dysfunction determine whether hoarding constitutes a disorder. At PCH Treatment Center, we have a highly qualified team of doctoral and masters level therapists, who carefully assess each client.

At PCH, we offer a separate treatment program for hoarding and other OCD-related disorders which utilizes cognitive behavioral therapies and exposure and response prevention. Cognitive behavioral therapy teaches positive behaviors (such as the ability to identify whether an object is worth keeping or not) and practicing discarding items. It is important to remember that just pressuring a person with hoarding disorder into cleaning their home will not necessarily produce lasting results. Hoarding behavior is persistent, and often can continue well into treatment. In certain cases, harm reduction is applied. Harm reduction refers to strategies to reduce potential hazards, such as blocked emergency exits, unsafe food items or household pests, while the behavior continues.

Treatment for hoarding may also require medication, in combination with therapies and to treat co-occurring disorders such as depression, OCD, or anxiety. At PCH we have a treatment team of four psychiatrists who have years of clinical experience working with clients with hoarding disorder and OCD-related problems. We also offer many adjunctive group therapies, art activities to teach coping skills, mindfulness based stress reduction, mentalization, neurofeedback and trauma-informed yoga and exercise.

PCH Treatment Center provides a therapeutic milieu which is an important component of healing the symptoms of hoarding disorder.